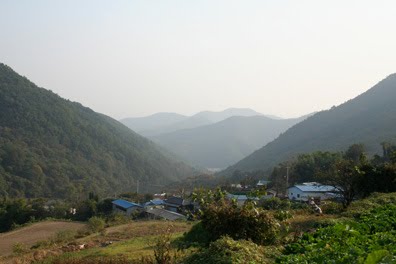 There is an old Korean saying, “Behind every mountain is another mountain.”  The mountains of Korea are magnificent so it is no wonder that many temples are built there,  In the mountains one is close to nature and nature and the natural are at the core of Korean aesthetics and philosophy.
Park Jong Il, a very spiritual tea ware artist, selected a spot near the top of a mountain to build his home and tea gallery.  His home and tea gallery were built by hand from raw clay and naturally hewn trees in the same manner that many ancient Korean potters built their homes and studios.
Being a tea ware artist has many facets.  We hope to introduce you to the lives of tea ware artists, both past and present, by discussing aspects of their lives.  Join us as we explore the story of tea ware. 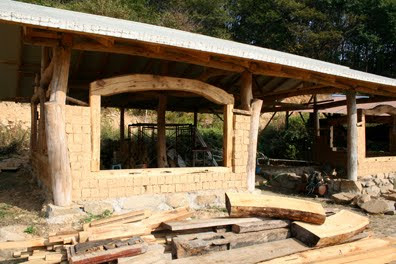 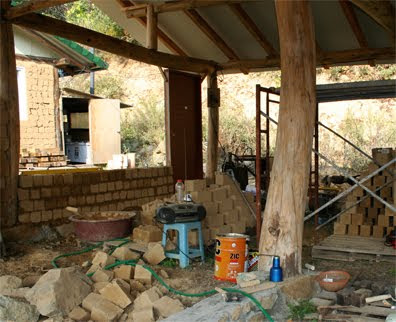 The Exterior After Completion 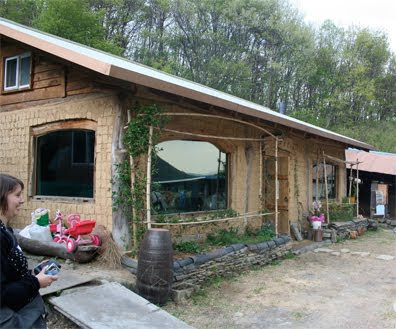 The interior after completion 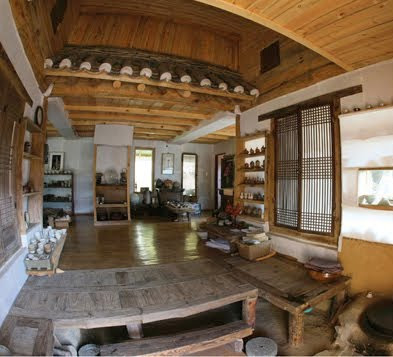 For a tea lover it is interesting that the clay to build the walls of this tea gallery came from the historic tea mountains of Jirisan near Hadong.  It is the same source of clay for many old tea bowls.  Trees from the mountains were hewn to support the tea gallery.  They contribute to the feeling of being close to nature while in the gallery.
To answer Matt's comment (below) and his question about the roof I decided to add a couple of photos and write a little more about Jong Il before introducing his work to you.
Jong Il is a simple, spiritual and sensitive potter living high in the mountains.  While there are many tea ware artists in Korea, only a few have reached the level of financial success necessary to permit them to do everything they would like to do to their home or gallery.  While a thatch roof would be very attractive and aesthetically compelling to have, they also demand considerable upkeep and can actually cause health problems.   Jong Il would like to use handmade roof tiles but the labor and expense in currently prohibitive.  In addition the art of creating tiled roofs by hand seems to be dying in Korea.  As far as we can determine the only person left in Korea who makes roof tiles by hand is the human cultural treasure Han Hyun Jun who lives in Jangheung, Chollanamdo.  Master Han is in his late 70's or early 80's and has great difficulty getting others to take up his laborious work.  We my be posting about our friend Han Hyun Jun in a few months.  So, in other words, Park Jong Il's roofs currently are composed of some contemporary materials that are visible in the following images.


Another View of the Tea Gallery 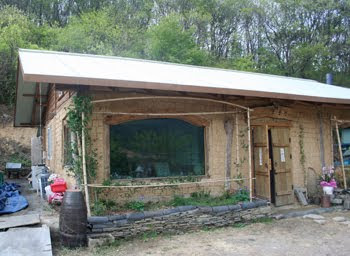 I decided to also post two images of the Park home.  The first shows the chimney for their ondol heating system and the second a onggi pot made in Ulsan at the Oe-gosan Onggi Village.  You can see and learn more about onggi at www.KoreanOnggi.com. 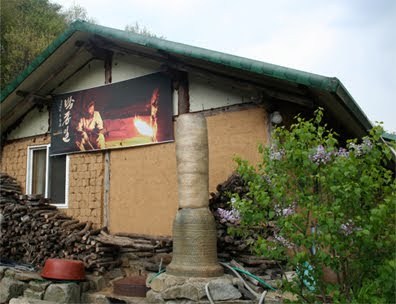 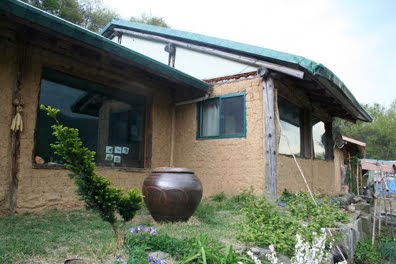 I know that you have been wondering what his work looks like.  So I'll be posting several pieces.  The first two images show his solution to "water and fire". 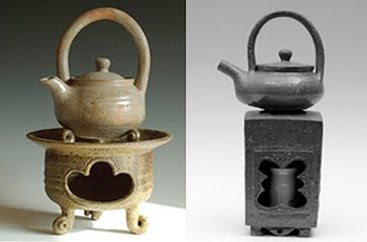 These water pots look a lot like Western tea pots but combined with their "fire bowls" they are used simply to keep the water for tea hot.  Jong Il has several solutions for handling the water for tea.  I'll show them in the next addition to this post.
I'll be introducing a number of ceramic tea artists on this blog - including some from other countries.   In addition, I'll introduce you to some of Korea's teas.  Matt is doing a great job at reviewing a number of great Korean teas on his blog so I suggest you visit his blog for more immediate information on tea.  He also looks at some great tea ware artists as well.  Many of whom we have known for years and will be reviewing more in depth here.