Tom's Moldy Pu-erh: What Would You Do?

For a number of years I have been interested in tea and teaware.  I enjoy a wide variety of teas including pu-erh.  There is a particular large 'black oil' pu-erh made by a Korean master in Yunnan but sold in Korea that I particularly enjoy.  But what little expertise I have regarding teas is limited to Korean teas.  That limited knowledge didn't seem to bother my friend Tom.  Tom had been to China and became interested in pu-erh tea.  Tom lives in Georgia in a fairly damp climate.  He is often plagued with mold in his home. Recently he called me to ask what he should do with the mold he is getting on his pu-erh.  I guess he thought I could help.  I told him I couldn't be of much help on this subject.  I called a friend who knows teas quite well but he too couldn't help because he knows how to prevent the mold and has never had to deal with it.  So I'm hoping some of you readers can help. 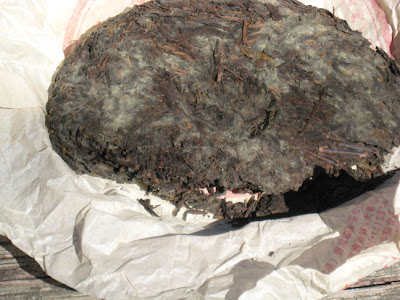 As you can see the mold is gray not the yellow mold that I'm told can be toxic.  I have also heard that one can simply brush it off with a dry toothbrush.
But 'common sense' tells me there is more to this situation than simply 'brushing it off".  Wouldn't that affect the taste of the tea?   In addition that won't solve his general moldy tea problem.  I suggested that Tom buy a dehumidifier for his house  and that If he does 'brush off' the tea that he should also blow it off with his air-gun to get rid of any mold pores that will remain on the tea after the brushing.  But basically, I'm wondering if he shouldn't just throw the tea away and take precautions to prevent it in the future.  Of course there is the other big issue for Tom.  He bought the tea while in China and really hates to throw it away.  What would you do?
Here is a closer look. 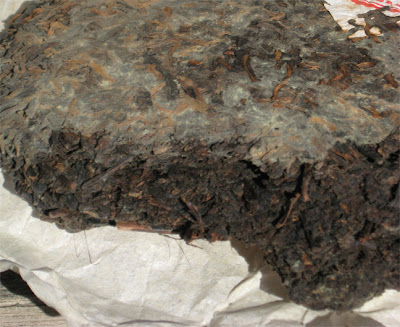 Here is an even closer look. 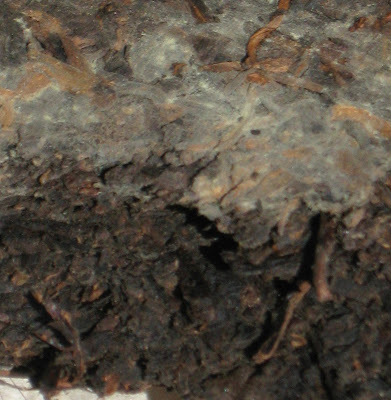 So, what would you do?